No shipments week of Thanksgiving, Christmas and New Years

Volcano Isle Fruit Company, Inc. (VIFC) has been marketing various fruits since 1974.  We have mainly grown and distributed papayas.  Our owners have been active in many of Hawaii’s agriculture organizations for decades.

VIFC is located in Kapoho.  VIFC was originally known as KAPOHO GROWN, and we still market some of our fruit under that name. 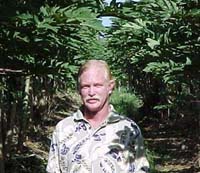 "A picture of why we are in this business
A beautiful winter day in Hawaii...
Sun, healthy soil, healthy trees.
Freshly mowed, recently pruned,
new Rainbow papaya field"

Volcano Isle Fruit company is located in Kapoho, Hawaii. Kapoho literally means "the depression" or "the sunken area" (also known as a "graben"). It is an ahupua'a (land division) in the district of Puna, on the eastern most point of the Big Island. (An ahupua'a traditionally runs from the mountain to the sea, often in a pie shaped wedge). Two faults, about a kilometer apart, run from the old town of Kapoho almost to the ocean. This area is referred to geologically as a graben. With a lull in volcanic activity since the eruption of 1840, the lush fertile area of Kapoho became inhabited; complete with popular beach houses along the tide pooled coast, a small town, stores, a school, a railroad station, and surrounding papaya and vegetable farms. Then, in 1955 and 1960, lava flows covered homes, school, stores, railroad, and farms. But the incredible climate, with an adequate rainfall of 100 inches/year, and cinder soils brought the farmers back, and today Kapoho is known for producing the sweetest papaya in the world.

1924 Kilauea eruption and steam explosions: Prior to the outbreak of lava from Halemaumau crater and Kilauea caldera, about 200 earthquakes, some of which were quite violent, were felt on April 22 and 23 at Kapoho, 45 kilometers east of the caldera. No lava erupted at Kapoho, but there were reports of the ground cracking open more than a meter in width and then closing up again. In one report a cow had fallen into a crack which then closed back up again with only the leg protruding. The graben dropped. Railroad tracts were bent downward 2.5 meters. Just north of Cape Kumukahi, the ground sank 4 meters, allowing the ocean to flood inland nearly a kilometer. Waves built a gravel berm leaving a brackish pond, that was fed by underground springs, and which was named Higashi's Fishpond. Up the rift at Kilauea's caldera, from May 11-24, one of Kilauea's most violent eruptions occurred with boiling cauliflower-like clouds of dust blasting out to a maximum of 6.5 kilometers above the crater and rocks weighing several tons thrown as far as a kilometer from the crater.

1955 Eruption of Kilauea:In late February of 1955, earthquakes, accompanied by dull rumblings and explosion-like noises from the ground, were felt along the lower east rift zone. On February 27th, about 700 earthquakes were felt. At the Nanawale Ranch, just northwest of Kapoho village, the ground was in almost constant vibration. Cracks opened up, parts of the graben subsided about 0.5 meter, and on March 1 the village of Kapoho was evacuated. A series of fissures opened up nearby and the village seemed doomed. Over 87½ million cubic meters of lava came out of more than 30 separate vents during this eruption. However, only about 15 houses on the village outskirts were destroyed by lava, while the main part was spared. Several papaya farms were covered in lava during this eruption.

1960 Eruption of Kilauea:Earthquakes in January 1960 earthquakes were again felt in the village of Kapoho. On Jan 12-13 they were reported to be so strong that it was difficult to remain standing. Cracks opened up in and around the village and portions of the graben sank up to 2 meters. The village lay almost entirely within the graben. On Jan 13, Civil Defense declared an evacuation. A fissure of lava fountains grew to a kilometer long. Groundwater was only about 25 meters below the surface. A swimming spot known as Warm Springs, which was created by a fault crack that exposed this groundwater, was popular for its thermally heated water and beautiful landscaping. It was filmed in the Hollywood movie "Bird of Paradise." The hot lava rising out of the fissures through the body of groundwater generated steam, which rushed out spewing cinder and pumice. In an effort to save Kapoho School, Kumukahi Lighthouse and several residences, bulldozers were put to work to build a wall of soil and rock 6 -9 meters high, about 5 kilometers long. On January 28, the ground surface just north of the wall near Kapoho School was heaved upward by underground magma, a fault developed along the wall, and lava from a vent on the fault destroyed the school and many of the houses. But though lava crawled to its very base, the lighthouse was spared. In addition, several beach houses were spared. Warm Springs was lost. By the end of the eruption, what was once a broad shallow valley was transformed into cinder hill 100 meters high, known as Pu'u Laimana. People whose homes were saved reported having to sweep the cinder off their roofs continually during the eruption to prevent the weight from caving in their roofs. This same cinder was also blown onto the agricultural land in the area near the vent. With lava entering the sea, more than a square kilometer of land was formed. Court disputes over the ownership of this new land have been resolved in favor of the State of Hawaii.

2018 Eruption of Kilauea: On Thursday, May 3, 2018, Kilauea Volcano began erupting in lower Puna, with multiple fissures opening in Leilani Estates, which is a neighborhood roughly 3 miles west of our farm. In the afternoon on May 29, 2018, lava crossed our main highway (Hwy 132) near Lava Tree State Park, leaving only one alternate route to the area (Government Beach Road/Hwy 137).

With the lava flow coming downhill towards the ocean, we frantically evacuated. On May 31, 2018, the lava reached our driveway, cutting off the access to our farm. Our neighborhood of mostly small farms had their access cut off until a private property owner opened his land to allow over 20 farms and residences to get back in. Then neighbors helped each other to build new gates so they could get to their homes. Many who were landlocked in the kipuka area were able to hike over the lava flow after the eruption stopped by again crossing over private parcels.

Our County and State government officials quickly opened new backroads and highways for us.

While most of our farm and home are still standing, many of our friends and neighbors have not been as fortunate. For those who have ever visited the area, the beautiful Kapoho Beach Lots, Vacationland, Waiopae Tide Pools, and Pohoiki Bay and Boat ramp have been completely covered in lava. The eruption destroyed 700 homes and covered 13.7 square miles, with an additional 875 acres of new land created in the ocean.